It would be hard to find a charter boat captain with as much sea time fishing the waters between New Orleans, LA and Mobile, AL as you’ll find with Captain Ron.  At a very young age, Captain Ron began his career on the water working on family owned commercial fishing vessels and has owned and operated his own charter fishing vessels since 1996.

Because of his love for the Gulf’s diverse fishery and his sincere desire to share the Gulf fishing experience with others, Captain Ron has become one of the top charter captains on the entire northern Gulf of Mexico.

At Captain Ron’s, your and your family’s safety is always paramount!  Our vessels go through a rigorous maintenance program and are fully maintained in a clean, comfortable, and safe manner so we can ensure you’ll have the best fishing experience to be found anywhere.

Over the years, Dustin moved up to the rank of Mate on the “On Strike” and proved himself to be one of the most impressive new-comers to the industry.  In 2017, Dustin was once again promoted, this time to the rank of Captain after completing one of the country’s most intense Captain’s School. 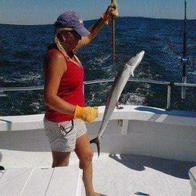 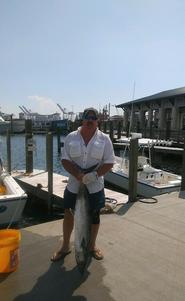 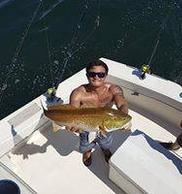 Captain Pandy has been with Captain Ron's for over 12 years. Captain Pandy knows all the ends and outs of the charters operation and currently serves as our office manager and fills in as mate when needed. During her career in the maritime industry she has not only been one of the industry's few female mates, she worked on one of the largest multi-passenger vessels operating out of Mississippi. Pandy has been in the marina management scene for the Coast largest marina for many years also. She currently holds a U.S. Coast Guard OUVP License with numerous certificates. Maybe You'll get lucky and have her aboard during your trip!